Read the first 2, skip the last 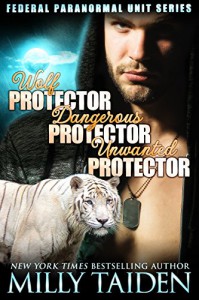 I have enjoyed the works of Milly Taiden for quite a while. As a Paranormal Romance reader, I have been often discouraged that authors are more focused on the sex scenes than having anything more than a wisp of story line as a vehicle for stringing together instances of raunchy rollicking. Hey, I love me some hot and nasty, but I want a story to go with it. And, mostly, Milly doesn’t let me down in the boxed Federal Paranormal Unit set. I had read the first in the box, Wolf Protector, some time ago, then wandered away (as usual) before checking out the next two, Dangerous Protector and Unwanted Protector. Having the whole series as a boxed set on Kindle Unlimited was a real treat, as my budget right now is so tight it squeaks!  So what to do but write a review in thanks?

The first, Wolf, is the story I had read previously and enjoyed. Erica Villa is a Profiler for the Federal Paranormal Unit, and one strong cookie. Her particular skills are hidden from the others on her team, other than their boss, Brock. He is the one who has always stayed with her, allowing her to exercise her skills in private, without the others knowing just what makes her different, and so exceptional at her job. But now, Brock has to leave her in the hands of her team members.  Buchanan and Ramirez are shifters, and ‘man whores par excellance’ swooping in on every woman who crosses their path. Jane is their computer maven, brilliant, sensitive, and very private. Of course, Buchanan has been sniffing up Erica’s tail for the ten years they have worked together as a team, though Erica will be damned before she allows a Casanova like him to make her just another conquest. Yes, some women really ‘don’t’ fall all over themselves like idiots over the “Bad Boy” which made her refreshing. But when she is thrown into his care, and he see exactly what she suffers while doing her job, his constant longing for the woman he has always wanted, but who went out of her way to stay away from him, leaves him determined to protect her at all costs. Of course the HEA is there, but the story keeps it interesting.

Dangerous, the second in the FPU series, introduces us to two new characters to the team. Martin Galvez, the uptight FBI department head who is determined to take over the FPU at all costs, even though, as Cynthia Vega, the new head of the FPU, puts it, he never will head the group, “Because you’re not special.”  And Cynthia herself, who was put in place by Galvez to be his eyes and ears, pushing out Brock for top spot in the team. The only thing is, Cynthia has no intentions of telling Galvez anything. Take that, overblown politician ego!

When Cynthia finds herself in the position of being the boss of her ex-lover things are hard enough. Especially with his feelings over her walking out on their engagement ten years ago without a word. But when she gets a call from back home, a place she hoped never to return to again, Brock is determined to go with her to find what has happened to her niece who disappeared. What they find there opens up old wounds, and could very well lead to Cynthia’s death. Another good entry to the series.

Then? Then we get to Unwanted . . . and the whole freakin’ thing blows up, falls apart, and well, just Eww. I would swear that someone else other than Milly wrote Unwanted and she simply added it to her series without even reading it first. The dialog is stilted, the story line unbelievable, there was no logic to the story, and the tone was over-the-top preachy and unbearably ridiculous. Hey, I totally agree with the basic ‘save the environment’ sentiment, but this was just, just, Ugh. The whole thing reeked. I made myself flip through it, but I couldn’t like the book at all. While the other two are a solid 4 as paranormal romance, I can’t give this one more than a one, and a grudging one at that. There were a lot of signs that Milly didn’t write this (or she did it on drugs), from the lack of contraction use to the awful dialog and stilted writing style.

Overall, read the first two, but give the third a hard skip. It left a bad taste in my mouth after enjoying the first two.