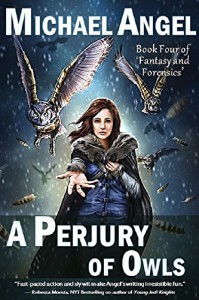 “The world is indeed full of peril, and in it there are many dark places; but still there is much that is fair, and though in all lands love is now mingled with grief, it grows perhaps the greater.” ― J.R.R. Tolkien, The Fellowship of the Ring

“I have come home at last! This is my real country! I belong here. This is the land I have been looking for all my life, though I never knew it till now…Come further up, come further in!”  ― C.S. Lewis, The Last Battle

A Perjury of Owls

Dayna Chrissie’s life has changed, drastically, since she was first yanked, very much against her will, into  Andeluvia. There has been death and loss, friends made – and enemies as well. She has fought griffins and demons, dragons, and even magical deer (yes, magical Deer… and a psycho one at that!) She has been through Hell and back for her friends and the land of Andeluvia, even when those she protects demean and try to destroy her.

“Nothing could be more heart rending than this mute and motionless dispair” ― Émile Zola, Thérèse Raquin

Dayna Chrissie is a Crime Scene Analyst for the LAPD, but these days she only works there third-time while she spends the great majority of her time in Andeluvia. But Andeluvia hasn’t been all that friendly to her. The nobles consider her an interloper, and as much as the King wants to hire her as his court Forensics Examiner he isn’t willing to go against the nobles to force her into place. So, what is a King to do but dub Dayna Chrissie “Dame” Chrissie? But being a Dame has its own perils indeed. And unless the Owls release their death grip on the Andeluvian treasury, her Damehood may not last more than a few days before the whole of the country descends into anarchy and murder.

Ah, but there is more going on. The Darkness is growing, feeding. The Griffins have lost the majority of their aerie. The Fayleene have been forced from their devastated home, and though the Centaur community is standing stable? The Owls, ah the Owls. Dayna’s friend Albess Thea is missing, and Raisah of the Noctua, a feared warrior sect of owls, has taken her place. And Raisah certainly does not the the welfare of Andeluvia, or even of the Parliament, at heart.

Sirrahon the Stone Dragon, ancient, cruel and released from his three-thousand year prison has disappeared, and no one knows where he might be. There are dark things moving, and in the Shadows the outline of a man lurks.  The demons are moving in the dark, and though everyone has seen what is happening, all are hiding their heads. All but Dayna and her intrepid crew, Grimshaw the Griffin, Liam the Fayleene Prince and Galen the Wizard who have been with Dayna through thick and thin, through war and death, but also through hope and understanding.

Michael’s Fantasy and Forensics remains one of my favorite fantasy series of all time. Alternately funny and touching, painful and heartwarming, if you haven’t started it yet, I can’t encourage you strongly enough to do so. Andeluvia and its inhabitants will be sure to pull at your heart, your mind, and your soul. Enjoy!

I work with Michael on his stories, so I should say here that I received this book for free but all of my thoughts are my own.