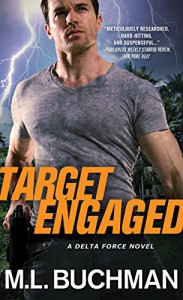 The Afghanistan war has been something of a testing ground for women in combat, with coalition members including Canada, Germany, Poland, and Sweden deploying women in frontline units for the first time. No significant problems were reported in the British survey, and some militaries found that women officers were more effective at some tasks, such as gathering intelligence from female civilians. – Joshua E. Keating, “Foreign Policy: Women on the Front Lines” February 3, 2012

Women in combat. Wow. Now there is a discussion as ‘hot-button’ as religion in the US. And M.L. Buchman pushes that button, hard, in his “Target Engaged.” And he does a Kick Ass job of it.

Buchman’s book couldn’t be more “up to the moment.” The news for September 11, 2015 was full of the results of the Marine Corp study carried out to test women in special operations combat situations. There was some good news, but mostly bad. The worst? The Marine study didn’t follow the guidelines set up for the test!! Instead of doing what they would do with the men special ops candidates, i.e., choosing the very best the Corp has to offer to go through special training, they chose “average.” AVERAGE??? Oh, cut me a freakin’ BREAK! AS IF they would choose “Average” males to go through special ops training! So, they got the results they were going for. Most of the women failed. Well, here is a little secret – Most of the men failed as well! That’s why they call it ‘special’ training. They weed out the weak. Of course, the articles you find on the net are varied by exactly who was writing them. Hampton Roads put the worst (read, most misogynist) spin on the results, while Stripes Okinawa was the most balanced I could find. I am embarrassed for the Marines, that they thought it necessary to try their best to skew the results for a bad outcome.

Where Buchman gets it right, and thrills me that I was offered his book for review, is in how he handles this issue with his Delta aspirant, Sergeant Carla Anderson. Carla is what the Marines should have aspired to in their test. She is no unbelievable Superwoman. She is simply a Soldier. An Army Sergeant with experience, intelligence, and above all, a drive to succeed that is unparalleled. And Buchman makes her believable. She is the kind of woman I always dreamed of being. Tough and ready to face the pain, but at the same time she is kind. She doesn’t take shit, but she doesn’t turn away from it either. She faces it all head-on. And when you dunk a fellow recruit’s head in the slit trench when he tries that misogynistic, hateful crap on you, well, the others have a tendency to stand back and let you do what you are going to do.

Buchman takes you through Delta training without pulling punches. I, of course, have no idea if what the recruits go through is realistic, but hey, it didn’t feel ‘unrealistic’ so I am going with it.

And, hey. Marines? You should read the book. Of 104 who started, all but Carla male, only seven graduated to the next level of training. And only five of those survived. Now THAT is realism in your training, kids.

Anyway. After a month of weeding out the weak, another of perfecting and tuning, the five remaining members of the class, including Anderson, are sent on their first operation. Venezuela, home of the “elected dictatorship” that runs on guns and drugs. And of course, having a woman on the team, especially one who has gone through Delta training and has a perfect, healthy body is, well, the perfect distraction for a drug lord’s guards. Just swagger across the compound with your shirt unbuttoned and everyone’s attention is riveted – enough to assure that picking them off is a piece of cake!

With that CIA run mission taken care of, they move immediately to the next. And the next may take them all out before they have been on the job for a week.

This is high-action, ladies and gents. Well written, exciting, and believable I found myself glued to my reader screen. Who needs food? Or sleep? Not when I can be reading Buchman! I had never read his work before, but I am loading all of his work into my Wish List.

The only thing that made me uneasy? This is a member of the “romantic suspense” genre. As such, Carla and Special Forces Sergeant First Class Kyle Reeves, one of the five, have a relationship. Buchman actually handles it well, but the very fact of the relationship aspect gave me pause. One of the things that women in the military face is sexual harassment. One of the things the military faces is women in the military being in relationships, and getting knocked up by, other soldiers. This is something that soldiers like Lance Cpl. Callahan Brown, one of the two women who survived the recent Marine test, has to face every day. All she wants is to be the best possible combat soldier. However, it is made harder than it should be, not only by the military brass and their fellow soldiers, but by other women who don’t have the fortitude to “Ovary-up” and concentrate on business, not what is between their legs. Buchman handles it fairly well, but it was still a concern for me, that Carla was distracted a couple of times from the business at hand by drooling over her fellow soldier. Of course, he was distracted at times as well, so goose and gander.

I received ”Target Engaged” from the publisher in exchange for a realistic review. All thoughts are my own.