A Brilliant Non-Magical Take on Werewolves - (and human nature) 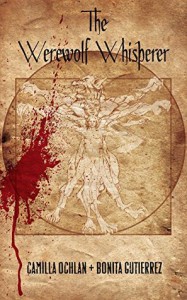 The most powerful weapon on earth is the human soul on fire. - Ferdinand Foch

Any deviation is looked upon as a perversion, is feared, and is usually a target of hatred and prejudice. - Joey Skaggs

Fear is the most debilitating emotion in the world, and it can keep you from ever truly knowing yourself and others - its adverse effects can no longer be overlooked or underestimated. Fear breeds hatred, and hatred has the power to destroy everything in its path. - Kevyn Aucoin

Lucy Lowell’s life changed in an instant – an instant in which her partner with the LAPD Animal Cruelty Task Force, Officer Gabe Torres, was shot in the back. A moment when Gabe – changed. When fangs and claws grew, bones twisted, and a monster stood before her. Her life changed. And then life changed. For the whole world.

Now, the problems of walking the dog, training and, of course, housebreaking, gain a whole new meaning… as in, teaching the family teenager not to chew on the furniture or use the floor for a toilet. Nope, these aren’t your sexy, muscled up Alpha heroes so adored by us lovers of Urban Fantasy. Uh uh – this is “Jimmy, get off the couch!” “Sally! Spit out my Louboutin!” “Bad Tommy! No piddling on the carpet!” Since the appearance of the Kyon Virus, California really has “gone to the dogs” – and these dogs can definitely go feral. An estimated 1-in-20 Californians are struck down when the Virus appears. No one seems to know what it is, where it comes from, or even though it is supposedly limited to California, just how far it has truly spread.

Of course, as humans will, for every calm and positive person willing to accept the Afflicted into their lives and their worlds, for every family willing to work with and continue to love their newest furry family member, there are the cruel, the vicious, the hateful and the murderous. And then there is Lucy Lowell and her partner, Xochitl Magaña. Lucy, better known by the public as “The Werewolf Whisperer,” the woman who can calm your Hound, control your Feral, or help you retain your sanity by putting down your beloved child who has become a Werebeast. Life isn’t easy for Lucy and Xochitl – but it is about to get a lot uglier, and more dangerous, than they would have ever believed. For there is a lot more going on than appears on the surface – and all the kings horses and all the kings men may never be able to put the world back together again.

The Werewolf Whisperer is, in a word, brilliant. There is no trope to this book. Instead, the story is unusual, amazingly well thought out, mature, and definitely non-magical. While the whole book is excellent, the authors interest in and research regarding military, scientific and medical issues really grabbed me, keeping me deeply interested in not only the story of Lucy, Xoc and the other major and minor characters in the story – but also in how beautifully the technical issues of the book were handled. Of course, psychology plays a huge role in a world where your child, your wife, your husband, or even your grandmother suddenly devolves into a wolf – a wolf who may have the personality of the biggest, dumbest, happy-go-lucky Golden Retriever you ever saw --- or of a rabid wolverine with a nasty hangnail.

Hate plays a huge part in the story. Humans hate anything, or anyone, they perceive as different from themselves. And Kyon provides just the excuse that the violent, the religious fanatics, the sad and savage and cruel and complete and totally whacked need to justify horrific actions.

"So you handled him the way human beings always handle things that are bigger than they are. You banded together. Like hunters trying to bring down a mastodon. Like bullfighters trying to weaken a giant bull to prepare it for the kill. Pokes, taunts, teases. Keep him turning around. He can't guess where the next blow was coming from. Prick him with barbs that stay under his skin. Weaken him with pain. Madden him. Because big as he is, you can make him do things. You can make him yell. You can make him run. You can make him cry. See? He's weaker than you after all." – Orson Scott Card

Of course, poking and prodding at the ‘dogs’ just won’t satisfy the hate when guns and torture work so very well. And being able to train and communicate with the ‘newly furry’ places Lucy square in the crosshairs of the religious fanatics, sure that the Kyon sufferers are actually demons sent by Satan, hated by their god, whoever they choose to call ‘him’, and fair game for the savagery of the “Righteous”. This is a story well versed in the ‘humans behaving badly’ concept of humanity as an entity.

While this can certainly be placed easily within the UF genre, I refuse to limit the book in this manner. I would instead call it a marriage of medical mystery, legal and military thriller, suspense, horror, and, oh yes, urban fantasy. After all, the main characters in the book do turn into ‘wolves’. Just not wolves as we have ever seen them before. And believe me – this a good, very good, wonderful thing.

Note: I have no idea how I came across The Werewolf Whisperer, but I can’t find an email from a publisher in my inbox, so I take it that it wasn’t offered to me by a publisher as many of the books I review are. I read the book through Kindle Unlimited, so I read it for free (Score!!!). I can’t recommend it highly enough. In many ways, the tone of the book reminds me of the works of Natasha Mostert in its surreal yet highly realistic, in its own way, delivery and storyline. Get it. Read it. I found it more than worth the reading time, and I look forward to the next book in the series! (Oh, and for those who mentioned that the Hispanic character is too “white” for their tastes – both of the authors, Camilla Ochlan and Bonita Gutierrez have very light skin and eyes. I would imagine that being “too white” is just as difficult in Hispanic culture as it is in Native American or African American circles – so in my mind, the skin colour issue simply adds another layer to a complex character…)